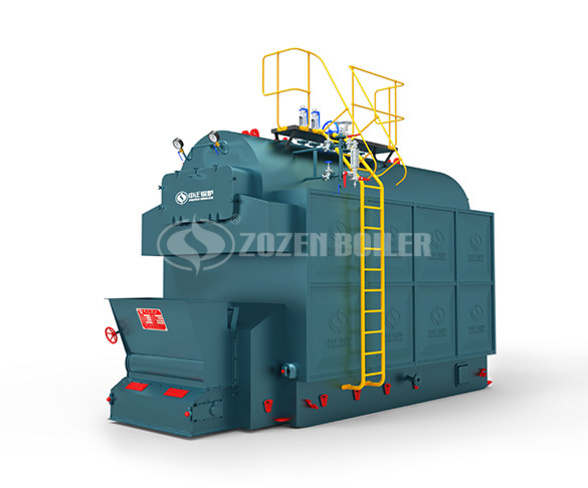 DZL series biomass steam boiler is a kind of horizontal biomass boiler, is specially burning biomass fuel as raw material for the steam boiler.The boiler is equipped with reciprocating grate, which is suitable for biomass fuel combustion.In the structural design of the boiler, compared with the traditional boiler, the chamber space is larger, and the layout of the secondary wind is very reasonable, which is conducive to the instantaneous combustion of a large number of volatile matter.

The water cooling system consists of three natural circulation loops.In order to reduce the inlet smoke temperature of the front tube plate, the convection flue is formed by the water-cooled wall pipes on both sides.POTS have continuous and regular sewage.Both sides of the container have regular sewage.

The feed water enters the boiler barrel through the economizer, part of which goes through the front and rear descending pipes into the circulation ascending pipes of both sides of the collecting box and then enters the boiler barrel for separation, while the other part is heated by the threaded pipe in the boiler barrel and the steam is naturally separated.The steam in the pot is drawn out by the main steam valve.The bottom of the cylinder directly in contact with the flame is insulated with heat insulation material, which further improves the safety of the soda system.

The wall of the furnace is made of light refractory brick and refractory concrete. The outside is insulated with vermiculite concrete.

The combustion system consists of a coal scuttle and a chain grate composed of a block grate and a speed regulating box.

The boiler adopts large chain grate, good ventilation effect, easy loading and unloading.The new type of downseal contact side seal is adopted to move the contact grate side seal to the lower part of the side grate, so that the part is in the state of no heat and air cooling, thus effectively avoiding burning loss, fuel leakage and air leakage.Place the two sides of the box above the side seal as an anticoke box.

There is an independent wind chamber under the grate, which is equipped with air according to the combustion condition. The primary air inlet is from the left side of the tail.The pusher and pull type sluice plate cleaning device is adopted to prevent the air leakage in the grate and the series air between the grate chamber.The secondary air is in the upper part of the front arch above the grate, and it supplies air to the space above the grate, which effectively complements the deficiency of the primary air.

When the boiler is running, the fuel is evenly spread on the grate in cambium layer, mixed with the primary wind, and gradually carries out the drying, pyrolysis, combustion and reduction process. The combustible gas and the secondary wind are fully mixed and burned in the space above the grate, with sufficient combustion and high fuel utilization rate.

The front of the furnace is provided with a coal scuttle and a coal gate to adjust the thickness of the fuel layer entering the grate.The grate speed is controlled by the reduction box.